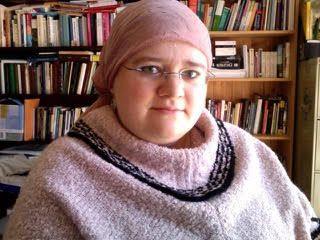 Dr. Rachel Woodlock is an academic and writer with a special interest in the experiences of Muslims in Western societies. She studied and worked at both the University of Melbourne and Monash University in Australia before she moved with her family to the quiet solitude of rural Ireland. She has lived as an expat Australian in County Tipperary for nearly four years, during which time she co-wrote For God’s Sake: An Atheist, a Jew, a Christian & a Muslim Debate Religion and co-edited the academic title Fear of Muslims? International Perspectives on Islamophobia.
Raised in a Baha’i family, Rachel found a new home in Islam in the late ‘90s, so she is an expat both geographically and religiously. Her religious life has taken some wandering twists and turns but she is particularly entranced by Islamic spirituality and its comparisons and overlaps with ascetic ancient Eastern Christianity. She also has an interest in Jewish-Muslim interfaith relations having attended Jewish religious education classes as a child, honeymooned in the Holy Land and worked professionally with colleagues at Monash University’s Australian Centre for Jewish Civilisation.
In Ireland, Rachel has found friendship, welcome and much craic!